What’s the Deal With a Catalytic vs a Non Catalytic Wood Stove? 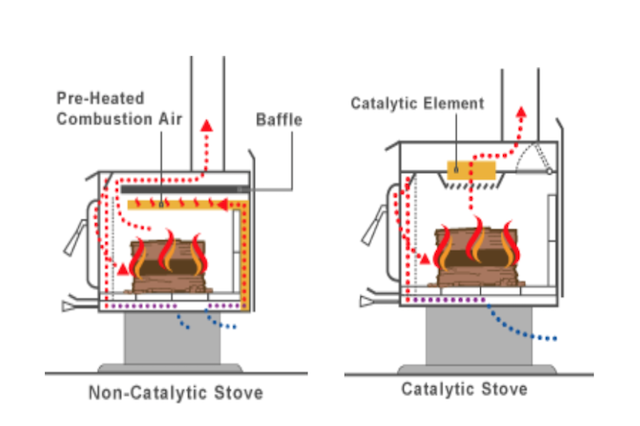 We always have options in life. Some people misuse the freedom and hurt those around them, like committing murder, wearing Crocs, or not ordering food then expecting you to share. Of course, people do make good decisions. For example, someone in history said, “These beans could kill us, or...make coffee.” That single act of bravery has brought joy, commerce, productivity, regular bowel movements, romance, and second-world development to billions of people. On a loosely-related note, fireplaces come with options as well. One decision potential wood stove owners have to make is whether to go with a catalytic or non catalytic wood stove. Let’s look.

In order to burn off as much particulate matter as possible - like soot, smoke, and gases - manufacturers design their wood stoves with devices that either raise temperature to burn the particulates before they leave, or they have to lower the burning point of the particulates to burn them easier, or both. Those two objectives are met by two different systems: catalytic and non catalytic wood stove designs.

A non catalytic wood stove attempts to reach a minimum temperature of 1,100 degrees Fahrenheit - the temperature at which most particulates burn. The high temperature is reached by utilizing a few components:

Catalytic systems have a honeycomb-shaped catalyst (ceramic insides coated in metal) at the top of the firebox that uses a chemical reaction between the metal and the particulates as they travel through the catalyst. This reaction lowers the burning point of the materials, making them easier to burn. If the system only needs to produce about 500 degrees to burn its particulates, that means it uses less fuel, which saves labor, money, and the environment. A catalyst is also great at holding heat, so in many cases the catalyst can be used as a heat source, and provide the heat at an even level.

Each type has upsides and downsides, as you would expect.

At The Fireplace and More Store, we will walk you through the process of picking the right unit for your needs. You won’t be alone to flounder. There will be no floundering, flailing, failing, flaking, falling, or fretting; no faux pas, guffaws, in-laws, or pitfalls like a grandma on a seesaw. We are here for you before, during, and after the sale. Contact us when you’re ready!

Check out our selection of wood stoves here!

Check out our other blog posts here!

We'll warm your house so it feels like home.